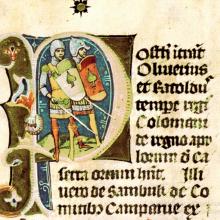 “King Zsigmond (Sigismund) was returning to Hungary. As he stepped in Hungarian territory, he met a company of some children playing soldiers. One of them was holding a flag. Zsigmond asked him whose soldiers they were. The boy answered they were the country's soldiers. The King asked if they would be the king's soldiers if he was their king. The child replied: "Yes, we would!"  The king liked the answer, and when this boy grew up, he was given the name Országh (- Country in English) and he was the founder of the family Országh.”

King Sigmond did more than that. He summoned Mihaly to his court and made him a royal squire. Mihaly moved up the ranks quickly becoming the Court Chamberlain in 1433. In that same year he accompanied the king to Rome where the pope crowned Sigismund as Holy Roman Emperor. He was still a young man in his 20s when he became the Royal Treasurer in1436.

Although the Guthy family was prestigious in terms of lineage, by Mihaly's time they had become impoverished members of the lesser nobility. He raised the family up to the highest level of the aristocracy, to barons of the realm who were addressed with the prefix 'magnificus.'

Although he excelled in political spheres Mihaly was also a knight with strong military abilities as well.

He fought with John Hunyady on the winning side of the civil war that followed the death of King Sigmond at the end of 1437. In 1445 Mihaly became one of the seven Captains of the Realm elected to govern the kingdom until the heir to the throne, Ladislaus II, who was not only a child but also held captive in Austria by Frederick III , could be crowned king. The seven captains in turn elected John Hunyady, who had become a national hero for his successful battles against the Turks, as Captain General of the Realm.

Mihaly was serving as commander of Belgrade Castle when the Ottoman Empire under Sultan Mehmed, in an attempt to invade Hungary, attacked the fortress with a force of 80,000- 100,000 soldiers. All Europe awaited the outcome anxiously. Mihaly only had about 2,000 men to defend the fortress. Luckily he was joined by his old friend, John Hunyady and his army of 20,000 men, half of them armed peasants and tradesmen rallied by a crusade preaching Franciscan monk. Together they managed not only to defend Belgrade but they pulled off a miraculous victory, routing the Turks and chasing them out of the kingdom. Pope Callixtus III ordered all of Christendom to pray for the defenders of Belgrade and that all the church bells in Europe ring out at noon in thier honor, a tradition that lasts to this day. John Hunyady died in the aftermath of the battle. No doubt, Mihaly was by his side.

″But afterwards, during the reign of King Peter, Kelad and Gút brothers of Swabian descent immigrated. They were born at the castle in Stof." - Illuminated Chronicle

The Zähringen Dynasty of the Castle Stauf ruled Swabia until around 1100.

The castle was built around the year 850 on the edge of the Black Forest -hence the pine tree image on the brothers' shields.

Gút is a village in Zala County near Székesfehérvár. The earliest record of it is from 1312 when it was in the possession the Guth family who, in 1328, traded the estate for Surany located in Nitra County in Upper Hungary (present day Slovakia).

Mihaly Orszag is one of the few direct ancestors of this era whose image has been preserved-  statues of members of King Sigismund's court were found in 1974 by archaeologist László Zolnay in the ruins of the palace of King Sigismund that had been discovered under Buda Castle.

"The young optimistic looking person wearing a felt hat is identified as King Sigismund’s young Treasurer-in-Chief by folio 103. Therefore he can be only Michael Ország de Gwth from the clan Gut-Keled." - Eugene Csocsán de Várallja (THE HUNGARIAN MONARCHY AND THE EUROPEAN RENAISSANCE Chapter I. The Statues of Buda Castle (2005))

The Chronicle of the Hungarians

During the reign of King Matthias, a clerk in the royal palace, Janos Thuroczy, decided to write a chronicle of the history of the kingdom during King Sigismund's reign. One of his main sources of information was from interviews and conversations with Palatine Orszag

Mihaly Orszag witnessed and participted in much of the history the chronicle covers.  So in a sense we have a record of our ancestor's words as well as an image of what he looked like. Thus we know more about this ancestor than we do about any others besides the Podmaniczkys.

Mihaly Orszagh relation to you

Orszagh and the Podmaniczky family

In present day Slovakia. Pledged to Mihaly Orszag by King Matthias in 1466. It became the Orszag family seat and remained in their possession for a century until the family name died out in 1567. The ruin draws many tourists for its later connection to the infamous murderess (although it is just a legend), Countess Bathory.

Jókő Castle given to Mihaly Orzsag in 1436 by King Sigismund.

The castle is in Nograd County in present day Hungary. Pledged to the Guthi Orszags by King Ladislas in 1454.

In Heves County, Hungary. Pledged to the Mihaly by King Matthias. Renovated and updated in 1561 by Mihaly's great grandson, Kristof, a favorite of King Ferdinand Habsburg, despite his conversion to Calvinism. Kristof, who was well educated and spoke several languages,  became the Count of Norgrad. He was a popular and heroic milatry figure in Hungary. He died in 1567 at the young age of 32 and was much mourned by his wife, Ilona Zrinyi and the country.

A memorial plaque over a red marble gate once read: