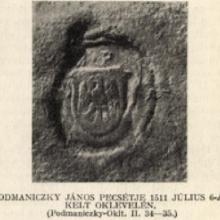 By the time of his death the eldest son of Laszlo Podmaniczky owned eight castles and dozens of estates and towns. He was also elevated, along with his brothers, to the  highest rank in the kingdom, Lord Baron, a hereditary title held by only three other families. The title came with a new coat-of-arms featuring a spread eagle and the right to use red sealing wax!

Janos I was the eldest son of Laszlo Podamiczky, commander in the Black Army and member of the Royal Council under King Matthias Corvinus. Janos was the only son born of Laszlo's first marriage to Magdolina Galszechy. Of the three brothers he seems to be the most ambitious and politically astute. Unlike his father, he was not completely devoted and loyal to King Mathias. He may have even participated in a minor rebellion against the king and was probably pardoned in part due to his father's influence in the royal court. Laszlo died in 1489 as did King Matthias in 1490. It is clear from what happened afterwards that Janos was one of the many barons who resented the autocratic rule of Matthias because although Matthias exacted a pledge from the barons to crown his illigitimate  son, John Corvinus, as king after he died, Janos did not do so. Like many of the magnates he rallied behind and fought for Wladyslaw, the King of Bohemia to become King of Hungary. He was elected and crowned in 1490. However, Maximillian Habsburg King of the Germans  (soon to be Holy Roman Emperor) also claimed the throne and invaded Hungary.

Janos Podmaniczky assembled a personal army of 5000 soldiers to help defeat Maximilian, reclaiming Kasza Castle in 1491. For his service he was rewarded with a high place on the Royal Council. He became a close personal advisor to  the new king and his wife, Queen Anne.

As a reward for his service, the king gave Janos many estates and town and the castles of Su'lov, Strecno, Lednica and Szuca. He bought Hrico Castle from his cousin, the son of Balazs Podmaniczky. He already owned the castles of Beszterce,(aka Povazska-Bystrica), Budatin, and Bytca.

What initially sparked the controversy was unclear but the official records of it started in 1515. That year Laszlo and Kelemen Rozson and a band of their serfs ravaged parts of the territory of the Podmaniczky, destroying crops and driving away the livestock of the Podmaniczky's serfs. If there was some motive other than a vague desire to cause trouble, it remained a mystery but the result could be clearly assessed in monetary terms; it cost Mihaly Podmaniczky, the father of Janos and Rafael, 500 gold pieces in damages. A year after the incident, Mihaly was made captain of the King's Guard by the new king and the following year convinced the king to give him the royal donation of the estate of Boleso. This was not merely part of a strategy to accumulate more territory but was a means of getting revenge: the village and estates of Boleso had been pledged to the Rozsons by the previous king. The Rozson were so angry about losing Boleso that after Mihaly took possession of the manor house, they gathered together some of their soldiers and besieged it, driving Mihaly Podmaniczky and his men out. In retaliation Mihaly gathered an armed force of several hundreds of his loyal knights and serfs and attacked the Rozson manor houses and fortresses. The Podmaniczky army took all of the valuables they found, including furniture and what they didn't take, they smashed or burned. They even destroyed the Rozson's fortress tower with siege engines. Both parties went to the king and accused the other of violent, aggressive acts but the matter had never been officially resolved. Mihaly let the Rozson keep there much devalued property but neither family forgave the other.